Showing posts from September, 2015
Show all

Transitioning into the Tribulation period judgment

Listen to what you need to hear. JEWS SEEKING MESSIAH

Our Once Great Land, by James VanPatton 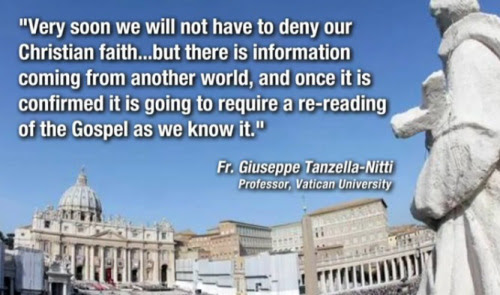 WARNING:  Time has Run Out.  Very soon true Christians will be Raptured (taken up in a twinkling of an eye) by Jesus and those who did not accept Jesus as their savior will be left here on earth to undergo 7 years of Tribulation that the world has never seen or imagined before.  The details are laid out in the Bible, primarily in Revelation.   Please note that after the Rapture of the "Church" the true bride of Christ, The Vatican, The Pope, will have all the answers for this shocking unimaginable disappearance of millions of Christians.  When the anti Christ is revealed he will have answers as the "aliens" who are really demons start appearing on the scene. The Vatican is already preparing the lost world as is clearly portrayed in the statement below: Please, if you are not saved by accepting Jesus Christ as your savior, do so immediately because time is very short.  If you read this somehow after millions of Christians have disappeared, DO NOT BE DECI
1 comment
Read more

September 17, 2015
Subject: Fwd: The Pope will arrive in Washington, D.C. just three hours before Yom Ki ppur The Pope’s US visit was scheduled according to prophecy Yesterday, I got the urge to listen further into the Jonathan Cahn video, and I’m glad I did. He goes on to state that the “Jubilee Year” will begin on Yom Kippur… yomkippur And who will arrive in Washington, D.C. just three hours before Yom Kippur begins at sunset? The King of the Roman Empire, of course… kingfrancis1 As my longtime readers know, I regard numerology and astrology as spiritually absurd, self-fulfilling silliness. The “elite,” however, love the stuff, and the Pope’s arrival is pregnant with numerological, astrological, and prophetic meaning. The Pope’s arrival in Washington, D.C. is scheduled for September 22 at 4 PM, and he will be met at the plane by Barack Obama. Given the contextual backdrop of an Asia-centered world order battling it out with a Western-centered world order, the 4 o’clock arrival is significant. I
Post a Comment
Read more