Showing posts from October, 2013
Show all

The Tyranny of the Weaker Brother

October 31, 2013
My entire Christian life of 50 years has seen more argumentative conflict and I've experienced more pain and suffering from Christians than from Unbelievers, Heathens and the like. Without going into all the scriptures I'd say any mature Christian would agree that our adversary Satan does his greatest work inside the church, working against the Saints and his greatest tool is LEGALISM which is Faith through Works and not Grace. One of my favorite books is "Pilgrims Progress" by John Bunyon.  The greatest battle he fought was also the greatest battle Martin Luther fought which was also the greatest battle Paul fought which was also the greatest battle of Jesus.  This was challenging the complete work of Jesus' sacrifice on the cross as "absolute" for all facets of Christianity from Salvation through Justification to preserve us until our day of Redemption. In other words: The great battle of GRACE vs WORKS.  Are we justified by our works
1 comment
Read more

Season of the Witch

The Omega Letter Intelligence Digest Vol: 145 Issue: 30 - Wednesday, October 30, 2013 Season of the Witch   Note:  Jack wrote this Letter  October 31, 2009 .  Pete Garcia's column, " Prophecy in Review " points us to the day when we will see the Lord face to face.  Religious holidays are all but illegal in 21st century America. Those few that survive have been watered-down beyond recognition. Thanksgiving, a day once solemnly set aside to thank God for our blessings as a nation, has morphed into Turkey Day, a day set aside to worship the guest of honor at dinner. "Who changed the truth of God into a lie, and worshipped and served the creature more than the Creator, who is blessed for ever. Amen."   ( Romans  1:25 ) Most Americans don't gather to give thanks to God, they gather to eat and watch football. For millions, it is the one day a year they say grace before meals, and that is about as religious a holiday as it is gonna get. But there is still
Post a Comment
Read more

Latest Prophecy Commentary The Blood Moon Mania: Legitimate Sign Or Hype? by      Dr. David R. Reagan About five years ago a Messianic rabbi in Tacoma, Washington, by the name of Mark Biltz, began to teach that the Second Coming of the Messiah would likely occur in the Fall of 2015. He based this prediction on the pattern of an astronomical phenomenon that he had discovered. His speculation was picked up immediately by the Bible prophecy sensationalists who specialize in playing around with such matters. The result was that Rabbi Biltz's theory became an Internet sensation. The basis of his theory — and not his conclusion — has now been given legitimacy by the publication of Pastor John Hagee's book,  Four Blood Moons  (Worthy Publishing, 2013). Red Flags But is the Mark Biltz's theory really legitimate? The first red flag of caution that must be considered is the source of the theory. Mark Biltz is not a mainstream Messianic rabbi. Instead, he is involved
Post a Comment
Read more

When the Lights Go Out On November 13, 2013 The following information is not provided to "scare" people but rather to INFORM: Jesus is the only true way of salvation: September 7, 2013   -  Featured ,  Main ,  Martial Law   -  Tagged:  blackout ,  emp ,  false flag ,  Grid take down drill ,  November 13 Dave Hodges http://thecommonsenseshow.com/2013/09/07/when-the-lights-go-out-on-november-13-2013/ September 7, 2013 There are very dark storm clouds gathering around the country and North America as a whole. Things are about to get dark, very dark in just a few short weeks. In just over two months, on November 13-14, 2013, the lights are about to go out. Will the lights come back on? It depends on who you ask. Given the past behavior of those in power, it would behoove all of us to prepare for the fact that we could be living for an extended time with no electricity.  November’s North American Power Grid Take Down Drill Within most
Post a Comment
Read more

Psalm 121:4  Behold, he that keepeth Israel shall neither  slumber nor sleep . Tuesday, October 29, 2013 |  Ryan Jones     Israel Today Israel's air force is globally recognized as one of the best. But  it also possesses hidden weapons that have never before been seen, Israeli President Shimon Peres cautioned last week . "Not all of the IDF's and the air force's capabilities are open to view. Whoever derides us and seeks to harass us should take this into account," Peres said during a visit to the large Palmachim Air Force base. The remarks were taken as a none-too-subtle warning to regional enemies like Iran and its proxies in Gaza and Lebanon. IDF Chief of Staff Gen. Benny Gantz followed the president by stating, "We are ready 365 days a year, at any range and facing any challenge. ...The air force is our main system for deterrence, offensive and defensive action, and has fantastic technological abilities."   Wh
Post a Comment
Read more

9 in Bible is JUDGMENT; #FUKUSHIMA is only the beginning 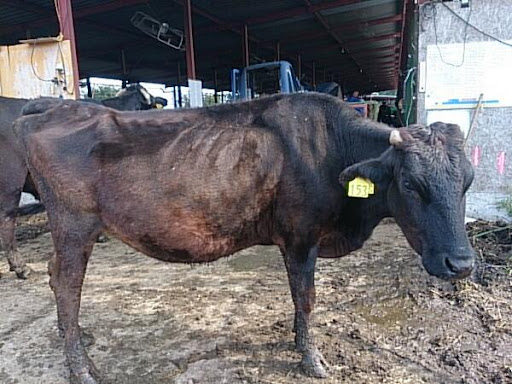 I found this photo on a twitter post from one of my contacts from Japan.  They are farmers and I believe living close to the Fukushima site. I was deeply saddened by their desperate plight evidenced by this photo and while looking at it, I was taken by this poor cow's ear tag number. 153 I added 1+5+3 = 9 and was struck by the number 9 represents JUDGMENT IN THE BIBLE. Fukushima is only the beginning.  Please if you don't know Jesus, repent and ask him to be your savior. plight 1 plīt/ noun 1 . a dangerous, difficult, or otherwise unfortunate situation. "we must direct our efforts toward relieving the plight of children living in poverty" synonyms: predicament ,  quandary , difficult situation, dire straits,  trouble ,  difficulty ,  extremity ,  bind ;  More
Post a Comment
Read more
More posts