Signs of the Times

1 Timothy 4:1 describes "falling away from the faith" in the last days in terms of falling into false, heretical beliefs. 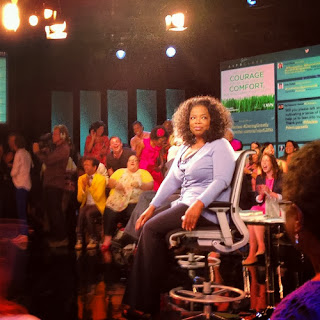 On October 5th, 2012, I watched 3 hours of live taping of Oprah’s Lifeclass online. This included an hour of Word Faith preacher Joel Osteen with Oprah and 2 hours of megachurch Pastor Rick Warren with Oprah. These programs will air later on the OWN network (Rick Warren’s two shows will air in early 2013).

It is important not to take scripture out of context, or to misapply it. Reading a passage in context and in comparison to other scripture on a similar topic or theme solves most mistakes or deliberate misuses of scripture applications.

Both Word of Faith teachings (Joel Osteen) and New Thought (Oprah) use scripture and claim Christianity, but take the Bible out of context to prop up false teachings. One of the most widely misused passages is Proverbs 23:7, “As a man thinketh, so is he.” This is quoted by almost every New Thought teacher who has ever lived to support the view that your thoughts determine the reality of your life. The deeper belief here is that your thoughts can alter reality, and that positive thoughts attract positive events while negative ones draw negative events. This is actually a principle of sorcery.

How do we know what Proverbs 23:7 really means? It’s easy to discover if one examines the entire passage. Then it becomes obvious that the text is denouncing acting outwardly one way while inwardly thinking another way. Starting at verse 6, we read: "Do not eat the bread of a selfish man, or desire his delicacies; for as he thinks within himself, so he is. He says to you, 'Eat and drink!' But his heart is not with you." Rather than buttressing New Thought principles, this passage is condemning selfish, hypocritical behavior!

The subtle deception of New Thought is that renewing one’s thinking can be done through techniques and self-effort. This is Satan’s counterfeit of the putting on of the “new self” and renewal of the mind by the power of the Holy Spirit, which only happens when one has believed in Christ and been regenerated by the Spirit (see Rom. 12:2; 2 Cor. 4:16; Eph. 4:23; Col. 3:10; Titus 3:5).

Osteen gave his usual Word of Faith teachings that words have power over our lives and this is the way to change our lives. He gave the same kind of affirmations that are taught in New Thought and the New Age, so Oprah was totally on board with this. Affirmations are statements that one repeats, verbally and/or in writing, so that they will become true.

Oprah was spiritually influenced by Unity minister Eric Butterworth’s teaching that Jesus came to show how to achieve Christ Consciousness (the realization that we all have an inherently divine nature). I was not surprised at anything Osteen said, nor that Oprah found him in line with her views.

However, although Rick Warren has had New Age Dr. Oz at his church (along with a professing Christian doctor who also endorses some New Age practices), I was hoping Rick Warren would give the gospel in the midst of his motivational advice, but he never did. He used the imagery of a poker game to explain we are dealt certain cards, and then gave a teaching on this that sounded like moralistic self-help programs I’ve heard so many times, throwing in a few Bible quotes taken out of context or misquoted. It was something almost any New Ager could accept. God becomes a tool for self-improvement and success.

Rick Warren referred to Jesus, but took scripture out of context and applied things said to believers to everyone. He also misused the Proverbs passage that says “as a man thinketh, so is he.” This passage is a famous text misused by New Thought proponents and is used in“The Secret.”

What was really hard to watch is when a woman in Norway Skyped to say she realized she needed God but wanted to know who God is and she asked, “What should I do?” It was clear that she was ripe to hear the gospel and needed Jesus! It was a great opportunity to share the gospel with her, and at the same time, for Oprah to hear it. Instead of giving the gospel, Rick Warren seemed uncomfortable and finally just said something like, ‘Go to God and find your purpose” (or "Go to God and you'll find your purpose"). It was a terrible moment! The woman looked surprised and sad, like she was expecting something else. I prayed for her later and am hoping that the many Christians who witnessed this will pray for her.

Not only that, but when Oprah referred to God, as she often did, Rick Warren agreed with her as though she was referring to the biblical God, which she was not. He even said a few times, “Oprah has a good point.” No, she never did! She was speaking totally out of her New Thought/New Age beliefs. I am grateful that Warren recommended that people read the gospel of John. That was the best thing he said.

A Different God and the True God

New Thought followers and New Agers will refer to God and Jesus, but it is a god who is a tool for self-betterment and success, and a Jesus who inspires as a human example – not the righteous God who has wrath on sin nor the God-man Jesus who through is death and resurrection is found forgiveness of sins and eternal life to those who believe.

"He who believes in Him is not judged; he who does not believe has been judged already, because he has not believed in the name of the only begotten Son of God." John 3:18

"Of Him all the prophets bear witness that through His name everyone who believes in Him receives forgiveness of sins.” Acts 10:43