October 04, 2013
PLEASE KNOW TIME HAS RUN OUT! FOR SEVERAL MONTHS NOW THE LORD HAS PLACED IT ON MY HEART TO WARN PEOPLE THAT JESUS IS COMING VERY SOON; AFTER HE TAKES HIS CHILDREN HOME, ALL HELL, LITERALLY, WILL BE UNLEASHED ON EARTH KNOWN AS THE TRIBULATION, THE TIME OF GOD'S WRATH AND JUDGMENT ON THE WORLD.

IF YOU DO NOT KNOW JESUS DO SO BY ASKING JESUS TO FORGIVE YOU OF YOUR SINS AND ASK JESUS TO BE YOUR SAVIOR.

In Christ, Tom Gaston
Rapturetj@comcast.net
Yellowstone ALERT!
You see folks!   God doesn't need mans stupid "technology" like so many naive christians think. He can devastate and unleash more hell on this planet than man every dreamed from mother nature which He controls.  And oh by the way!   God is going to destroy the surface of this planet all by Himself , as He doesn't need anyone to help Him!
There is so much of what I call...."Christian Folklore" being taught today by Christian authors and teachers who try and paint a picture of those judgments in the book of Revelation as mans judgments.    Man is going to destroy the earth with His nuclear bombs and war machine don't you know!  WRONG!
Makes me sick to my stomach to hear such false teaching and sensational hype!  Too many ignorant Christians who know very little about prophecy and they have God on the "sidelines" twiddling His "thumbs" during the tribulation period and have Him wondering when "man" is going to let him "get off the bench" and off the "sidelines" and get into the game.
For all of you Christians who think that the tribulation judgments are of man,  then you need to go and read Isaiah chapter 24 and get educated!   And that is just one area of Scripture out of many that tells the true story of what God is going to do during the "Day of the Lord's judgments."   As early as the "sixth seal" everyone is going to be scrambling and hiding in the rocks, caves, and mountains in order to "hide from God's wrath" which they acknowledge themselves ( Rev. chapter 6 ).
All God has to do is "burp Yellowstone" and this country is toast!
The Lord is coming any day folks!  We are just waiting for the SHOUTand the BIG YANK!
Even so, Come Lord Jesus! 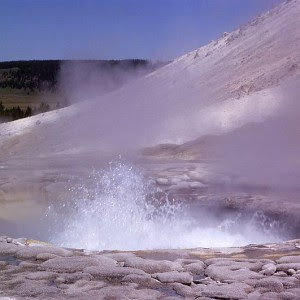 Right now, the ground underneath Yellowstone National Park is rising at a record rate. In fact, it is rising at the rate of about three inches per year. The reason why this is such a concern is because underneath the park sits the Yellowstone supervolcano – the largest volcano in North America. Scientists tell us that it is inevitable that it will erupt again one day ( during the tribulation period it will ), and when it does the devastation will be almost unimaginable.
A full-blown eruption of the Yellowstone supervolcano would dump a 10 foot deep layer of volcanic ash up to1,000 miles away, and it would render much of the United States uninhabitable. When most Americans think of Yellowstone, they tend to conjure up images of Yogi Bear and “Old Faithful”, but the truth is that sleeping underneath Yellowstone is a volcanic beast that could destroy our nation in a single day and now that beast is starting to wake up.  The Yellowstone supervolcano is so vast that it is hard to put it into words. According to the Daily Mail, the magma “hotspot” underneath Yellowstone is approximately300 miles wide…

The Yellowstone Caldera is one of nature’s most awesome creations and sits atop North America’s largest volcanic field. Its name means ‘cooking pot’ or ‘cauldron’ and it is formed when land collapses following a volcanic explosion.  In Yellowstone, some 400 miles beneath the Earth’s surface is a magma ‘hotspot’ which rises to 30 miles underground before spreading out over an area of 300 miles across. Atop this, but still beneath the surface, sits the slumbering volcano.

When most Americans think of volcanic eruptions in the United States, they remember the catastrophic eruption ofMount St. Helens back in 1980. But that eruption would not even be worth comparing to a full-blown eruption of the Yellowstone supervolcano.   And now the area around Yellowstone is becoming increasingly seismically active.   In fact, Professor Bob Smith says that he has never seen anything like this in the 53 years that he has been watching Yellowstone…

Until recently, Bob Smith had never witnessed two simultaneous earthquake swarms in his 53years of monitoring seismic activity in and around the Yellowstone Caldera.  Now, Smith, a University of Utah geophysics professor, has seen three swarms at once.

In September, 130 earthquakes hit Yellowstone over the course of a single week. This has got many Yellowstone observers extremely concerned…

Yellowstone’s recent earthquake swarms started on Sept. 10 and were shaking until about 11:30 a.m.Sept. 16.  “A total of 130 earthquakes of magnitude 0.6 to 3.6 have occurred in these three areas, however, most have occurred in the Lower Geyser Basin,” a University of Utah statement said. “Notably much of seismicity in Yellowstone occurs as swarms.”

So what is the worst case scenario?  Well, according to the Daily Mail, a full-blown eruption of Yellowstone could leave two-thirds of the United States completely uninhabitable…

It would explode with a force a thousand times more powerful than the Mount St Helens eruption in 1980.  Spewing lava far into the sky, a cloud of plant-killing ash would fan out and dump a layer 10ft deep up to 1,000 miles away.  Two-thirds of the U.S. could become uninhabitable as toxic air sweeps through it, grounding thousands of flights and forcing millions to leave their homes.

Popocatepetl Volcano is at it again. The active volcano near Mexico City erupted again this morning, spewing ash up into the sky.  The volcano is currently in the middle of an extremely active phase. According to the International Business Times, the volcano has registered 39 exhalations in the last 24 hours.
An eruption earlier this month caused several flights to be canceled in and out of Mexico City.
The BBC notes that officials raised the alert level yellow following Popocateptl’s eruption on Saturdaymorning. Yellow is the third-highest caution level on the city’s seven step scale.

Ash wafted as high as 3 miles above the Sakurajima volcano in the southern city of Kagoshima on Sunday afternoon, forming its highest plume since the Japan Meteorological Agency started keeping records in 2006. Lava flowed just over half a mile from the fissure, and several huge volcanic rocks rolled down the mountainside.  Though the eruption was more massive than usual, residents of the city of about 600,000 are used to hearing from their 3,664-foot neighbor. Kagoshima officials said in a statement that this was Sakurajima’s 500th eruption this year alone.

So what does all of this mean?  Are we now entering a time when volcanic eruptions will become much more common all over the globe?  Could we rapidly be approaching the day when an absolutely devastating volcanic eruption will paralyze much of North America?  Please feel free to share what you think by posting a comment below…