Showing posts from June, 2021
Show all

The irony of John MacArthur teaching his followers to "Judge Everything " is beyond words. God does have a sense of humor reminding me how Jesus would continually catch the Pharisees in the trap of their own words. I have reprinted John's message below. In truth much of what John writes is truth and this is what is so deceptive today in this late hour. Especially deceptive is John telling his flock to examine and judge everything carefully like he does.  This gives the sheep another layer of a false sense of security.  If truth was truly John's passion why would he use a perverted Bible translation as his reference? If John truly wanted his sheep to know the truth why would he use  in different translations as if they were all authentic translations?  Let's take John's teaching at face value and let's examine what John writes. Background: Before reading the teaching of John please read my Blogs exposing John's false teaching here and tell John his teac
Post a Comment
Read more

I am a Gardner and the Weeds abound all the more 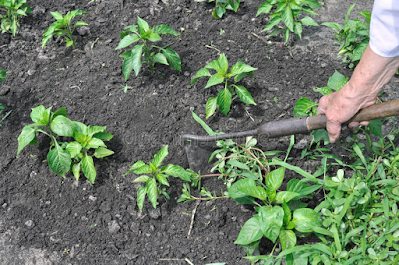 Blessed be the God and Father of our Lord Jesus Christ, who hath blessed us with all spiritual blessings in heavenly places in Christ. Ephesians 1:3 KJV The Spiritual Manifested in the Physical By God's abundant grace - while pulling weeds in my garden -  The Lord showed me each time I removed a weed by its root, the same thing happens spiritually each time I call out false teachers, charlatans, the wolves who make merchandise of the Body of Christ today. I realized that the Holy Spirit was showing me a spiritual dimension manifesting in the physical dimension. I invite the reader to read my Blog on the flood of updates on the apostate fake church of today. I started the updates of apostasy over 1 year ago with a few articles.  The updates have exceeded a couple hundred and I could be adding to it daily to keep up. Even so - Come Lord Jesus! Maranatha! The Flood of Updates on The Apostate Fake Church of Today; Wake Up Christian! Come Out! (thethirdheaventraveler.com)
Post a Comment
Read more

June 11, 2021
California and Nevada are now 100 % in drought  https://www.theepochtimes.com/california-and-nevada-are-now-100-percent-in-drought_3849227.html Red alert': Lake Mead falls to lowest water level since Hoover Dam's construction in 1930s Ian James Arizona Republic PHOENIX – Lake Mead has declined to its  lowest level since the reservoir was filled in the 1930s  following the construction of Hoover Dam, marking a new milestone for the water-starved Colorado River in a downward spiral that shows no sign of letting up. The reservoir near Las Vegas holds water for cities, farms and tribal lands in Arizona, Nevada, California and Mexico. Years of unrelenting drought and temperatures pushed higher by climate change are shrinking the flow into the lake, contributing to the large mismatch between the demands for water and the Colorado’s diminishing supply. The lake's rapid decline has been outpacing projections from just a few months ago. Its surface reached a new low Wednesday night
Post a Comment
Read more
More posts