Let's examine Timothy Treadwell, Grizzly Man; Examine yourself today to see who or what you worship

18 For the wrath of God is revealed from heaven against all ungodliness and unrighteousness of men, who hold the truth in unrighteousness;
19 Because that which may be known of God is manifest in them; for God hath shewed it unto them.
20 For the invisible things of him from the creation of the world are clearly seen, being understood by the things that are made, even his eternal power and Godhead; so that they are without excuse:
21 Because that, when they knew God, they glorified him not as God, neither were thankful; but became vain in their imaginations, and their foolish heart was darkened.
22 Professing themselves to be wise, they became fools,
23 And changed the glory of the uncorruptible God into an image made like to corruptible man, and to birds, and fourfooted beasts, and creeping things.
24 Wherefore God also gave them up to uncleanness through the lusts of their own hearts, to dishonour their own bodies between themselves:
25 Who changed the truth of God into a lie, and worshipped and served the creature more than the Creator, who is blessed for ever. Amen.
26 For this cause God gave them up unto vile affections: for even their women did change the natural use into that which is against nature: 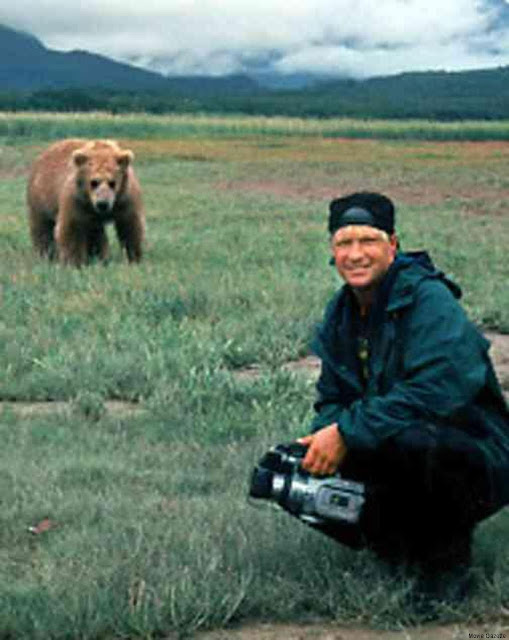 Grizzly man made his own religion identified in the Bible as worshipping the creature and not the creator.  By studying this man it is painfully obvious he was a narcissist prideful heathen who worshipped nature, especially the Grizzly Bear.  God allowed this man to continue on his blinded pride fueled quest in defiance of man's laws and more importantly God's laws of the universe.  Timothy had no fear of God nor man.

He boasted many times he could be killed by one of these beasts, but knew how to take AUTHORITY over them.  How blind.

Here's what God thinks of a man and his pathetic mate who do not fear God nor man nor beast, but finds himself as a god:

Quote from investigation in links below:  "roughly 6 minutes. During this period, Tim’s cries and pleadings can be heard for two-thirds of that time. He did not die quickly, unlike some traumatic death victims who were lucky enough to drift off into a shock induced dream state. Tim was obviously very aware and struggling desperately to survive during the last moments of his life."