For The Spirit searches all things, yes the deep things of God. 1 Corinthians 2:9-10; At that time Jesus, full of joy through the Holy Spirit, said, “I praise you, Father, Lord of heaven and earth, because you have hidden these things from the wise and learned, and revealed them to little children. Yes, Father, for this is what you were pleased to do. Luke 10:21


Based on the overwhelming signs of the times as witnessed by hundreds of YouTube videos of Saints crying out with visions of imminent Rapture; global events that are literally being matched with bible prophecy; the numerous profound signs through bible code (Please see my blogs regarding Pentecost Rapture Watch 2015 posts by Mr. Tom Gaston), and the logical conclusion that Jesus will bring home the church on the same event that started the church, I propose we may very well be raptured on Pentecost 2015 (May 24, 2015) .


Knowing that God does nothing without revealing his plans to his children who diligently seek him (AMOS 3:7; COL 3:1,2; HEBREWS 11:6) I'd like to add to Mr. Gaston's profound research by providing the following celestial configuration below that will appear in the morning sky in the east on the Morning of May 24, 2015 PENTECOST. (Stellarium 11.4) (Detailed Explanations and associated links are provided below) 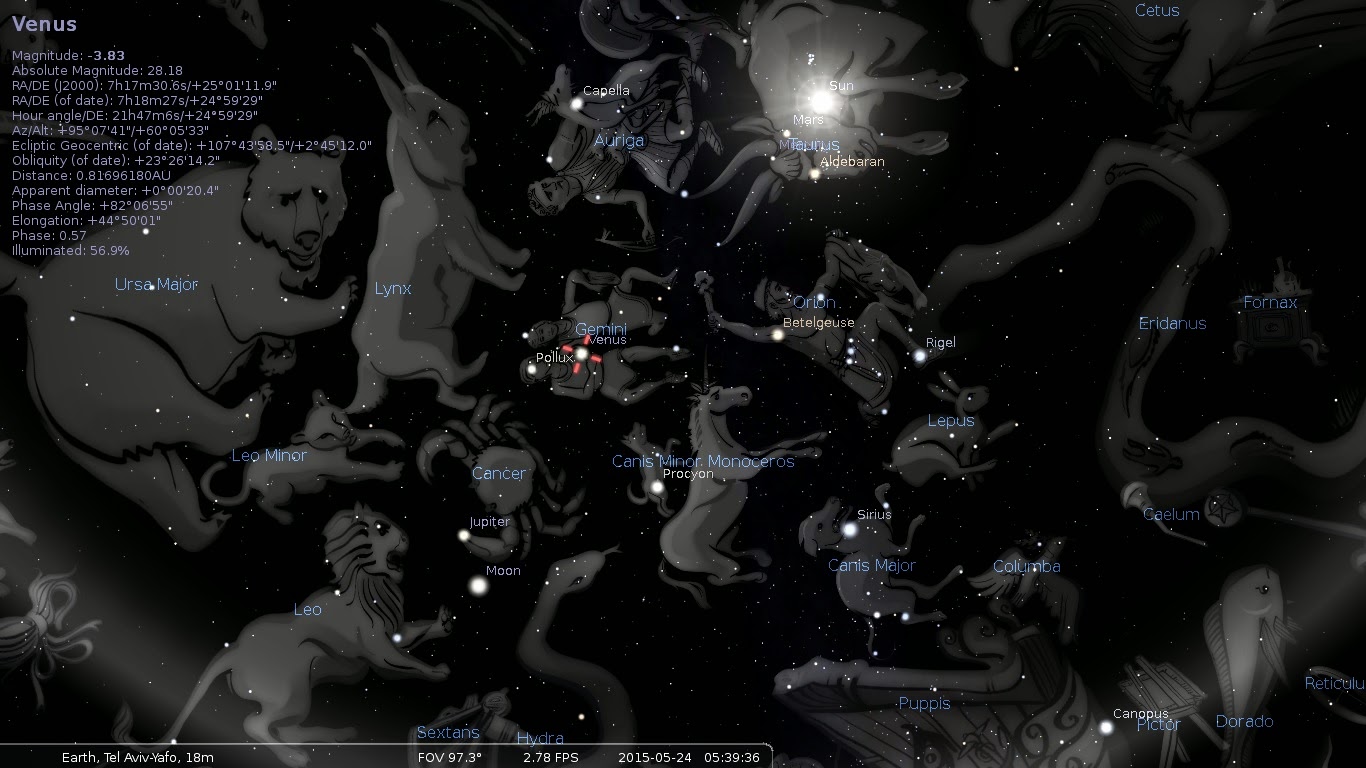 
Right in the middle of this configuration is GEMINI with Venus the morning star in the middle. This clearly represents Jesus coming to marry his bride the Church. This sign is witnessed by Leo, Jupiter, Orion, and the Sun in Taurus. I won't go into great detail about these celestial signs, but I've listed the numerous links and references below to explain why this configuration that will appear on PENTECOST 2015 is clearly a sign in the heavens that we could very well be taken home to be with our Lord. Yes, dear Saints, I believe this is finally our calling home.

Even so come Lord Jesus.


WITNESS OF THE STARS; BULLINGER


GOD'S DESIGN WITH NUMBERS AND SIGNS


BIBLE SIGNS IN THE HEAVENS

Note 1: In the writings of his five famous books, Moses noted that the sun, moon, planets and stars were given for “signs” (Genesis 1:14).Job 26 tells us that the“crooked serpent” is one of God’s leading characters in this drama of the ages and that these constellations — these “pillars of heaven” — make up the “parts” of God’s “ways”:Scripture confirms the existence of this message in the stars. Psalm 19:1-6 states:


“The heavens declare the glory of God; and the firmament sheweth his handiwork. Day unto day uttereth speech, and night unto night sheweth knowledge. There is no speech nor language, where their voice is not heard. Their line is gone out through all the earth and their words to the end of the world. In them hath he set a tabernacle for the sun. Which is as a bridegroom coming out of his chamber, and rejoiceth as a strong man to run a race. His going forth is from the end of the heaven, and his circuit unto the ends of it; and there is nothing hid from the heat thereof”.


Verses 2,3, and 4 quite clearly record the existence of this message in the stars. Paul refers to this in Romans 10:18, speaking about Israel he says:


“But I say, Have they not heard? Yes verily, their sound went into all the earth, and their words unto the ends of the world.”


Notice that both quotations state that the words went to all corners of the world. So all mankind could have seen it! This in turn is proven by the astronomical records of a number of ancient civilizations which have come down to us.


Psalm 147:4 adds: “He telleth the number of the stars; he calleth them all by their names”.


Isaiah 40:26 continues the story: “Lift up your eyes on high, and behold who hath created these things, that bringeth out their host by number; he calleth them all by names by the greatness of his might for that he is strong in power; not one faileth.”


Job 9:8 & 9 tells us: “(God) Which alone spreadeth out the heavens, and treadeth upon the waves of the sea. Which maketh Arcturus, Orion, and Pleiades, and the chambers of the south “.


God himself speaks to Job in 38:31 & 32: “Canst thou bind the sweet influences of Pleiades, or loose the bands of Orion? Canst thou bring Mazzaroth in his season? or canst thou guide Arcturus with his sons?”