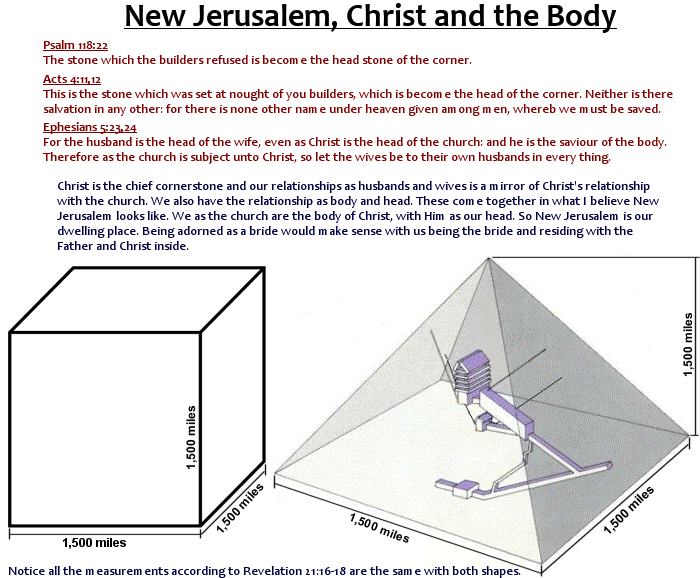 Scripture tells us that the universe is set up as a pyramid.  There is compelling evidence from scripture and from the physical realm, for example the great pyramids of Giza, that what exists on earth and how it was constructed and for what purpose, proving what exists in heaven and will appear and manifest in the next realm.

When Heaven comes down to earth at the end of this realm, the new Jerusalem will touch down and will appear on earth in Jerusalem.   Notes below refer.

Pyramid Shape of the Universe by Dr. Eugene Kim

The Nephilim and their Pyramid by Dr. Herron

On In the far sides of the North

Scriptures referring to the Pyramid Formation

22 But ye are come unto mount Sion, and unto the city of the living God, the heavenly Jerusalem, and to an innumerable company of angels,

48 Great is the Lord, and greatly to be praised in the city of our God, in the mountain of his holiness.
2 Beautiful for situation, the joy of the whole earth, is mount Zion, on the sides of the north, the city of the great King.
3 God is known in her palaces for a refuge.
4 For, lo, the kings were assembled, they passed by together.
5 They saw it, and so they marvelled; they were troubled, and hasted away.
6 Fear took hold upon them there, and pain, as of a woman in travail.
7 Thou breakest the ships of Tarshish with an east wind.
8 As we have heard, so have we seen in the city of the Lord of hosts, in the city of our God: God will establish it for ever. Selah.
9 We have thought of thy lovingkindness, O God, in the midst of thy temple.
10 According to thy name, O God, so is thy praise unto the ends of the earth: thy right hand is full of righteousness.
11 Let mount Zion rejoice, let the daughters of Judah be glad, because of thy judgments.
12 Walk about Zion, and go round about her: tell the towers thereof.
13 Mark ye well her bulwarks, consider her palaces; that ye may tell it to the generation following.
14 For this God is our God for ever and ever: he will be our guide even unto death.

13 For thou hast said in thine heart, I will ascend into heaven, I will exalt my throne above the stars of God: I will sit also upon the mount of the congregation, in the sides of the north:

The New Heaven and A New Earth
Revelation 21

10 And he carried me away in the spirit to a great and high mountain, and shewed me that great city, the holy Jerusalem, descending out of heaven from God,
11 Having the glory of God: and her light was like unto a stone most precious, even like a jasper stone, clear as crystal;
12 And had a wall great and high, and had twelve gates, and at the gates twelve angels, and names written thereon, which are the names of the twelve tribes of the children of Israel:
13 On the east three gates; on the north three gates; on the south three gates; and on the west three gates.
14 And the wall of the city had twelve foundations, and in them the names of the twelve apostles of the Lamb.
15 And he that talked with me had a golden reed to measure the city, and the gates thereof, and the wall thereof.
16 And the city lieth foursquare, and the length is as large as the breadth: and he measured the city with the reed, twelve thousand furlongs. The length and the breadth and the height of it are equal.
17 And he measured the wall thereof, an hundred and forty and four cubits, according to the measure of a man, that is, of the angel.
18 And the building of the wall of it was of jasper: and the city was pure gold, like unto clear glass.
19 And the foundations of the wall of the city were garnished with all manner of precious stones. The first foundation was jasper; the second, sapphire; the third, a chalcedony; the fourth, an emerald;
20 The fifth, sardonyx; the sixth, sardius; the seventh, chrysolite; the eighth, beryl; the ninth, a topaz; the tenth, a chrysoprasus; the eleventh, a jacinth; the twelfth, an amethyst.
21 And the twelve gates were twelve pearls; every several gate was of one pearl: and the street of the city was pure gold, as it were transparent glass.
22 And I saw no temple therein: for the Lord God Almighty and the Lamb are the temple of it.
23 And the city had no need of the sun, neither of the moon, to shine in it: for the glory of God did lighten it, and the Lamb is the light thereof.
24 And the nations of them which are saved shall walk in the light of it: and the kings of the earth do bring their glory and honour into it.
25 And the gates of it shall not be shut at all by day: for there shall be no night there.
26 And they shall bring the glory and honour of the nations into it.
27 And there shall in no wise enter into it any thing that defileth, neither whatsoever worketh abomination, or maketh a lie: but they which are written in the Lamb's book of life.

Illustration of a square based Pyramid 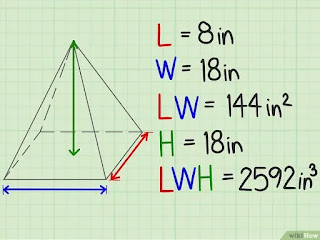