This headline article really grabbed my attention.  We Saints know the number 9 means JUDGEMENT in the bible.  We Saints know that Israel is our clock to view Bible end times prophecy.  We know that God will severely punish anyone who divides Israel's land.   Look up Saints! ^  Our Redemption is very near!  Hallelujah!
Praise God! Amen! Maranatha!
(Disclaimer: Although I understand the JNS is a Zionist Agenda is not fully in keeping with the Jews who are God's chosen remnant, however we can see a tremendous amount of prophecy being laid out before our very eyes today.  We must remember that God used the Rothschilds bankers to restore the land of Israel. As someone wrote: "Today when we read the newspaper we're reading Bible Prophecy before our very eyes.")
See my study:

ANTIZIONISM is not ANTISEMITISM 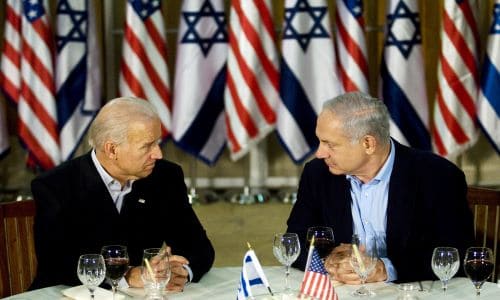 The Biden administration reportedly intends to demand that Israel return to the nine-miles-wide pre-1967 armistice lines. Should we be surprised? How dangerous would that be? And what should American Jews do about it?

According to numerous media reports, an outline of the Biden plan has been prepared by Hady Amr, the deputy assistant secretary for Israeli and Palestinian Affairs. Amr worked on the same issues during the Obama administration.

So, it's hardly surprising that the plan he has drafted reflects the same positions that were taken when Barack Obama was president and Joe Biden was vice president.

The central theme of Biden's Israeli-Palestinian policy in the short term, according to the Amr memo, will be a series of rewards to be given to the Palestinian Authority, even though the P.A. has done absolutely nothing to merit any of them.

Despite the P.A.'s financial support for terrorists, harboring of fugitive terrorists, constant anti-Jewish incitement and unrelenting anti-American propaganda, the Biden administration intends to "reset the U.S. relationship with the Palestinian people and leadership" by:

- Soon expanding that P.A. aid package to include "a full range of economic, security and humanitarian assistance," including funds for the corrupt, pro-terrorist UNRWA agency. By "security" aid, Amr undoubtedly means the pro-terrorist, de facto army that the P.A. calls its "security services."

- Resuming diplomatic contacts with P.A. officials by reopening the PLO embassy in Washington, D.C., and using the old (but still functioning) American consulate in Jerusalem as a de facto embassy to the Palestinians.

- Inviting the United Nations and the Quartet, both of which are militantly pro-Palestinian, to "engage" in the diplomatic process.

- Resuming "country of origin labeling," which means declaring that goods made in much of Jerusalem, as well as Judea, Samaria and the Golan Heights, will be forced to carry "Made in Palestine" labels since the Biden administration has decided that all those areas belong to the Palestinian Arabs.

In return, the Biden administration intends to make two laughably inadequate "demands" of the P.A. First, it will seek "to obtain a Palestinian commitment" to stop paying terrorists, which will probably be as genuine and durable as all the previous P.A. commitments to stop aiding terrorists.

Second, Biden will "emphasize to the P.A." the need for "reductions of arrests of bloggers and dissidents." What a joke! The P.A. won't even be expected to stop arresting dissidents; it just has to arrest a few less.


What's most important, however, is the end goal of the Biden plan. Amr's draft says that all of the above steps are "a means to advance the prospects of a negotiated two-state solution ... based on the 1967 lines with mutually agreed land swaps."


In plain English, that means a sovereign "State of Palestine" in all, or nearly all, of Judea and Samaria, and the Gaza Strip (and part of Jerusalem). The "land swaps" phrase can be disregarded. It's nonsense; obviously, if Israel and the P.A. ever wanted to "swap land"--which they don't--they don't need a plan by U.S. President Joe Biden to do it.


The plan is, put simply, the "Nine-Miles Wide Plan." It has to be. Because any Palestinian state has to include the third-largest P.A. city, Tulkarm, and the fifth-largest P.A. city, Qalqilya. The P.A. is not going to make those cities part of Israel. So, they will be part of "Palestine." Tulkarm and Qalqilya are nine miles from the Mediterranean Sea. Israel won't even be as wide as Washington, D.C.--or the Bronx, N.Y.

One terrifying anecdote from 1967 tells you all you need to know about the dangers of Biden's "Nine-Miles Wide Plan." On the eve of the Six-Day War, as hostilities seemed increasingly likely, numerous Israeli mothers residing along the coast kept their children home from school. Why? Because they knew that the country could be sliced in two by a Jordanian tank column in a matter of minutes, and they didn't want their children to be trapped on the other side. Imagine living with that kind of fear.

What should American Jews do? Turn to all our tried-and-true methods of lobbying and protest. Write letters. Make phone calls. Urge Jewish organizations to speak out. Do it now--while there is still time. Let the Biden administration see that we will not accept its deadly plan.