Paving the Road to Hell; Churches and their Social Gospel 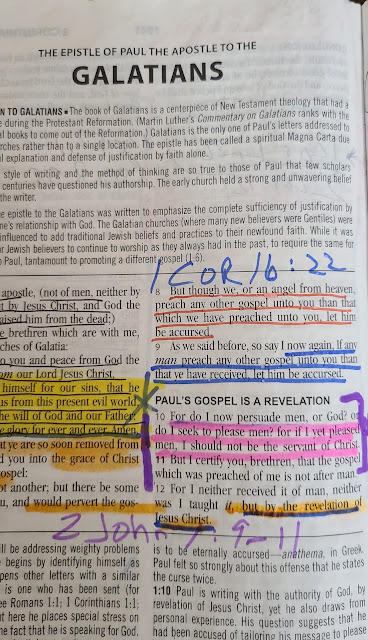 https://www.thethirdheaventraveler.com/2020/08/abc_15.html
Most if not all Churches support, defend, practice and promote the  social justice as their false gospel. They are guilty of and in violation of Galatians 1:8,9 KJV and will be judged by God accordingly.
Another reason of hundreds more to run far away from that brick and mortar 501C building Operation called a church run by apostate trained CEOs called pastors.  See complete Blog addressing this issue here.
I don't go to church
https://www.thethirdheaventraveler.com/2020/10/i-dont-go-to-church.html
If you still want to say, " God bless America" think carefully after you realize exactly what America has become today.  This doesn't address the worst crimes of murdering innocent babies in the womb which is fully legal and supported by our laws and most Americans.  Last year I was under conviction of the Holy Spirit to remove and replace my license plate that stated: "In God We Trust" .  It is a mockery to say America trusts in God.  It's past the point of no return.
Take a moment and read the article below from American Thinker to get a great look at how we as America really operate in the business world. Remember this world is fallen and belongs to Satan who is the prince of this world.
Disclaimer.  The author this article references is still naïve enough to believe things can be changed which all true Christians know is absurd.
It is not until Jesus Christ returns and establishes His Theocracy and Smashes His enemies with a rod of iron and dash them in pieces like a pottery will this fallen world be restored in perfect righteousness.  AMEN! MARANATHA!
https://www.americanthinker.com/articles/2021/03/the_tyranny_of_woke_capital.html
The Tyranny of Woke Capital

Traditional American values have long been under attack by social justice warriors, cultural Marxists advancing the insidious tenets of critical theory. Their “long march through the institutions” has infiltrated schools, universities, entertainment, the mass media, the courts, politics, and beyond. One might assume that business, adhering to the Milton Friedman doctrine of maximizing returns for shareholders, would be insulated from their malign agenda. But that assumption is no longer valid, according to Stephen Soukup’s recent book The Dictatorship of Woke Capital: How Political Correctness Captured Big Business. He illuminates how ‘progressive’ forces have insinuated themselves into regulatory agencies, the finance industry, and corporate America, jeopardizing capital markets and the free-market system itself.

The book traces the genesis of American progressivism to Richard Ely (1854-1943) of Johns Hopkins University. Believing in a confused amalgam of religion, socialism, white superiority, and a paternalistic state, Ely advocated that the state should be harnessed to fix social problems like poverty, alcoholism, racial tension, and child labor in G-d’s name. He never presented himself as a socialist, but believed G-d works through the state, which should heal the ills of capitalism through labor reform and compulsory education. With little faith in the canaille to vote in society’s and their own best interests, he favored a “third way”: employing professional administrators to manage society rationally, guard against laissez-faire economics, and make socialism unnecessary. This new progressivism looked at the American state as the natural, necessary “administrator” of civic life.

Political scientist Dwight Waldo, the defining figure of modern public administration, refined Ely’s ideas and propounded that public servants should be “value advocates,” “agent of change,” and stewards of “social equity, democratic administration, and proactive, non-neutral public administration.” Voters and their elected representatives were to be superseded by unelected, unaccountable experts -- with ostensibly better values than the people. Though it was seen as being in violation of the Constitution, Waldo wanted a central bank with an administrative elite controlling monetary policy to maintain stability.

Soukup goes on to explain how contemporary left-leaning liberalism elevates these ideas of working through institutions. While Marx presumed that history was about economic conflict, the Italian communist philosopher Antonio Gramsci argued that the key struggle was cultural. To inspire revolution and liberate the working class, it was necessary to vanquish the church and other enablers of bourgeois culture. Herbert Marcuse, a key figure of the Frankfurt School and proclaimed father of the New Left, fused Marx, Gramsci, and Freud to conclude that capitalism crushed human capacity for creativity, spontaneity, critical thought, and oppositional behavior. The Frankfurt School became the spark for Cultural Marxism to shift its focus to Critical Theory, which aims to critique power structures and undo the cultural and psychological hegemony of the bourgeois. This philosophy paved the way for the 1960s’ radical student movement. It was these alienated youths who initiated the subversion of the American university. The idea that traditional American culture was a selfish and inhibiting bourgeois false reality took hold in academia. The “march through the institutions” had begun, spreading from the universities to the professions and other domains.

At this point, according to Soukup, a major obstacle to the cultural revolution was America’s rootedness in business, with its dependence on and responsibility for structure, order, production, investment, and prosperity. But a slow change began in the 1970s, with the ideas of socially responsible investment and stakeholder interests -- rather than shareholder interests -- taking precedence. Religious groups had wielded such influence on businesses in the 1950-60s by avoiding “sin stocks.” But now, there was a political

dimension: the clout of the shareholder was used to pressure companies to accommodate social or political goals. Over the decades since then, managers have come to focus on ethical and social issues, capital markets have become politicized, and strategic business planning is mired in conflicting ideas of social justice. From the early 2000s, businesses have been gravitating towards incorporating environmental, social, and governance (ESG) issues into investment policy.

The Big Three investment management companies -- BlackRock, Vanguard, and State Street -- are well-aligned on ESG goals. Together holding about 22% shares of the typical Standard & Poor’s 500 company. Soukup gives readers an idea of the clout they command with the example of asset manager Larry Fink of BlackRock, who manages more than $7 trillion in passive assets and $2.5 trillion in active assets. Such firms can operate independently of the will of the people, effecting change at whatever companies they choose.

Their cynicism and hypocrisy are on shameless display. BlackRock is a member of Climate Action 100+, an investor group aligned with the Paris Agreement, but is one of the biggest American investors in Communist China, the world’s largest greenhouse gas emitter. It plans to expand operations and become China’s leading foreign asset manager. Ironically, in America BlackRock speaks of sustainability goals that put our companies at competitive disadvantage to Chinese ones. Many hedge funds are players in this politicization of capital markets: they cheer autocratic China and are harshly critical of American capitalism. Government pension funds too are politically compromised: promoting progressive activism and focusing on ESG, they end up performing subpar instead of maximizing returns for pensioners. The California Public Employees Retirement System (CalPERS), the largest pension fund in the U.S., has $3 billion invested in China, including in Chinese military contractors.

Soukup charts how activists realized in the late 1980s that they could influence capital markets to advance their political agendas and impose their moral framework on the business world. Many powerful activist nonprofits use shareholder resolutions, disavowal of pro-business trade groups, and arbitrary reports or public ratings of companies’ social responsibility policies (such as the Corporate Equality Index) to push their own goals.

Even government agencies, such as the Securities and Exchange Commission (SEC), the CFA Institute, the Federal Reserve, and central banks are in the game. The SEC has abandoned objectivism to approve of the activist, interventionist stakeholder model; the CFA has included material on ESG in its curriculum; the Fed has set up a financial infrastructure that rewards progressive interests and sees the climate change issue as one of its fiduciary responsibilities.

Several major U.S. companies contribute to the “woke capital” dictatorship. Apple, with its largest manufacture base and second largest consumer market in China, is a staunch ESG advocate when convenient. It donates to egalitarian causes and promotes a carbon-free future, but powers just 5% of its operations with renewables, has a planned obsolescence policy that uses minerals mined through child labor in Africa, and avoids $77 billion in U.S. taxes by using slave labor in China. Disney is unwilling to displease China, one of the biggest film-watching countries, but is happy to needle state government at home for legislation that serves its woke interests. AmazonSmile relies on the hate-mongering Southern Poverty Law Center, which defunds conservative organizations by mislabeling them as “hate groups,” to approve its charitable donations.

Soukup warns that we must fight to “preserve the spirit of innovation and expression that harnesses liberty to create wealth and prosperity.” The free-market economy and the American way of life are in danger. It’s time, he says, to “depoliticize business, depoliticize markets, get back to neutral.”