Hell Is Real; Jesus Teaches this truth in Rich Man and Lazarus Luke 16:19-31

HELL IS REAL:  One of the most graphic examples of this is given by Jesus in Luke 16:19-31 in the story of
the rich man and Lazarus.   Many false teachers push this off as parable that is strictly allegorical in nature; although there are allegorical ties, this story is extremely literal. It is a lie from hell to teach this is not related directly to a real snap shot of life after death.  There's no doubt there was an actual man named Lazarus who went through the exact situation.
Here's a video representation of this powerful scripture:
More Information on The Rich man and Lazarus: 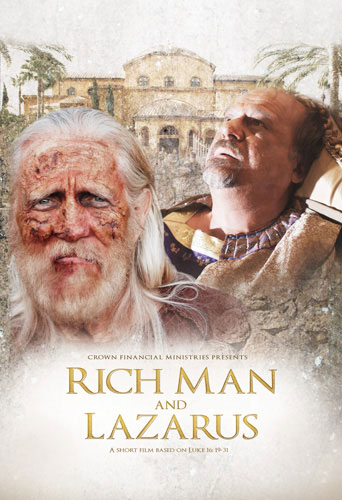 What God tells us about Life After Death; Your Eternal Life Depends On This

Please understand that hell is real and what you do in this life has eternal consequences.

Please accept Jesus now before it is too late.

Jesus gave us a story about a real life poor man named Lazarus and a rich man who both died.  Lazarus went to heaven and the rich man went to hell. (note: I'm not implying nor did Christ that being rich entitles one to hell or poor to heaven; it is their lives that are important and what they believed in.)

WARNING:  Some false teachers teach that the story of Lazarus and the rich man is only a parable that is only an allegory; i.e,  not real but a story to teach some lesson.  This is a lie.  Please understand that parables DO NOT GIVE PEOPLE'S NAMES.  Jesus wasn't playing games with this story. IT IS A SERIOUS WARNING:   PLEASE FOR YOUR SAKE, TREAT IT AS SUCH.
We can see in the story of Lazarus and the rich man that after each have died, both were conscious and self-aware. Jesus is obviously teaching that the soul survives after death. Still, there are those who will say that this is a parable. Of course, the problem with this theory is that parables don't have proper names in them. In this case there is a specific individual named: Lazarus. Also, if it were a parable, then what is Jesus saying with the illustration of consciousness after death and before the resurrection? The most logical answer is that Jesus was teaching us that there is life after death.
http://carm.org/soul-cease-exist-after-death
Maranatha!!!

“Now there was a certain rich man, and he habitually dressed in purple and fine linen, gaily living in splendor every day. 20 “And a certain poor man named Lazarus was laid at his gate, covered with sores, 21 and longing to be fed with the crumbs which were falling from the rich man’s table; besides, even the dogs were coming and licking his sores. 22 “Now it came about that the poor man died and he was carried away by the angels to Abraham’s bosom; and the rich man also died and was buried. 23 “And in Hades he lifted up his eyes, being in torment, and saw Abraham far away, and Lazarus in his bosom. 24 “And he cried out and said, ‘Father Abraham, have mercy on me, and send Lazarus, that he may dip the tip of his finger in water and cool off my tongue; for I am in agony in this flame.’ 25 “But Abraham said, ‘Child, remember that during your life you received your good things, and likewise Lazarus bad things; but now he is being comforted here, and you are in agony. 26 ‘And besides all this, between us and you there is a great chasm fixed, in order that those who wish to come over from here to you may not be able, and that none may cross over from there to us.’ 27 “And he said, ‘Then I beg you, Father, that you send him to my father’s house— 28 for I have five brothers—that he may warn them, lest they also come to this place of torment.’ 29 “But Abraham *said, ‘They have Moses and the Prophets; let them hear them.’ 30 “But he said, ‘No, Father Abraham, but if someone goes to them from the dead, they will repent!’ 31 “But he said to him, ‘If they do not listen to Moses and the Prophets, neither will they be persuaded if someone rises from the dead.’”