February 29, 2020
Saints Look Up^  Our Redemption is near. The Rapture of the Church is imminent and again this coming Passover season through Pentecost I am especially watchful. I look at Pentecost in particular as an extremely high Rapture watch time.


Pentecost 2020 is listed online as May 31, 2020. However, there is stronger scripture evidence found after studying a few other Brother's in Christ who are waiting and watching for our Redemption like I have been these years, it now appears that the most "probable" Pentecost is not May 2020 but rather July 21 - 26 2020 because of Leviticus 23:9-16 KJV 49 days after firstfruits (April 18, 2020) plus 50 days = 99 days.  This is a good study:  https://www.youtube.com/watch?v=tSdYQzgvnBw&feature=youtu.be

Regarding those who look for Rosh Hashana Rapture:


I used to look at Rosh Hashana based on what others said until I studied it deeper myself and found that Rosh Hashana will be fulfilled in the Tribulation.  Here's a link:

Why Rosh Hashanah Fulfilled in Tribulation not Rapture.
https://www.judeochristianincharlotte.com/feast-of-trumpets

There are however other Saints who hold fast with very convincing evidence that Rosh Hashana will usher in Rapture and then the immediate Tribulation which fulfills the First Fall Feast. Here are few recaps from a Rosh Rapture Watcher:


"As already mentioned, the Feast of Trumpets also signals a resurrection of the dead. The apostle Paul spoke of this event: “For since by man came death, by Man also came the resurrection of the dead. For as in Adam all die, even so in Christ all shall be made alive. But each one in his own order: Christ the firstfruits, afterward those who are Christ’s at His coming ” (1 Corinthians 15:21-23).
Paul again further explained: “For the Lord Himself will descend from heaven with a shout, with the voice of an archangel, and with the trumpet of God. And the dead in Christ will rise first” (1 Thessalonians 4:16), immediately followed by the people of God who are alive at that time 1 Thessalonians 4:17).
Revelation 20:5-6 describes this as the “first resurrection,” which is also a “better resurrection” (Hebrews 11:35). This change to immortal life was the hope of early Christians and remains the fervent hope of those who understand God’s plan.
In the book of Romans, Paul depicts this resurrection as a glorious deliverance from bondage: “For the earnest expectation of the creation eagerly waits for the revealing of the sons of God . . . because the creation itself also will be delivered from the bondage of corruption into the glorious liberty of the children of God . . . And not only they, but we also who have the firstfruits of the Spirit, even we ourselves groan within ourselves, eagerly waiting for the adoption [or full rights of sonship], the redemption of our body” (Romans 8:19, Romans 8:21, Romans 8:23).
We see that, even though tragic events lie ahead, the good news is that God will intervene to save humanity and guide mankind into His abundant way of life. Jesus Christ will return to raise His followers from death and establish God’s perfect rule over the earth. This is the wonderful, inspiring meaning of the Feast of Trumpets

I also found a fascinating connection using the Noah's Ark as a type and shadow of the Rapture.


1 (A Psalm of David.) The LORD said unto my Lord, Sit thou at my right hand, until I make thine enemies thy footstool.
2 The LORD shall send the rod of thy strength out of Zion: rule thou in the midst of thine enemies.
3 Thy people shall be willing in the day of thy power, in the beauties of holiness from the womb of the morning: thou hast the dew of thy youth.
4 The LORD hath sworn, and will not repent, Thou art a priest for ever after the order of Melchizedek.
5 The Lord at thy right hand shall strike through kings in the day of his wrath.
6 He shall judge among the heathen, he shall fill the places with the dead bodies; he shall wound the heads over many countries.
7 He shall drink of the brook in the way: therefore shall he lift up the head.

12 And there appeared a great wonder in heaven; a woman clothed with the sun, and the moon under her feet, and upon her head a crown of twelve stars:
2 And she being with child cried, travailing in birth, and pained to be delivered.
3 And there appeared another wonder in heaven; and behold a great red dragon, having seven heads and ten horns, and seven crowns upon his heads.
4 And his tail drew the third part of the stars of heaven, and did cast them to the earth: and the dragon stood before the woman which was ready to be delivered, for to devour her child as soon as it was born.
5 And she brought forth a man child, who was to rule all nations with a rod of iron: and her child was caught up unto God, and to his throne.
6 And the woman fled into the wilderness, where she hath a place prepared of God, that they should feed her there a thousand two hundred and threescore days.
7 And there was war in heaven: Michael and his angels fought against the dragon; and the dragon fought and his angels,

Just another reason why I'm looking especially close to a 2020 Rapture.

The Revelation 12 Sign at Rosh Hashana 2020 over Jerusalem.  The Bride will be with Christ and the woman clothed with the sun with the moon at her feet will go through the final purification through judgment before atonement. 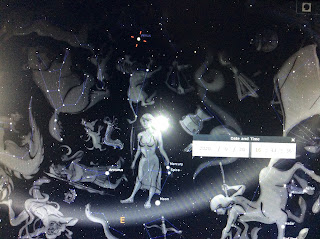 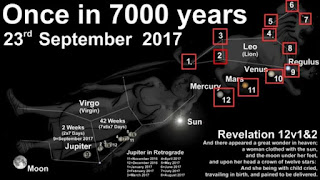 I believe 2017 was the sign in heaven showing us Revelation 12.  The Rapture of the church and the following Tribulation will begin.  Add 3 years to 2017 = 2020.  I believe we're in the perfect Rapture window.  Look at the number 3 in the Bible in fulfillment of a promise.

(Note: My brother in Christ Kent, states following: "I’ve run the time clock forward on star map for the next three years.

Only 2017 and this year 2020 on Yom Teruah, is SHE clothed in the Sun with the Moon at her feet AND Venus IS a morning star.
The other years Venus has become an evening star and the moon is in her belly etc etc on Yom Teruah. (If Bright Morning Star Rev 22:16 means anything regarding the actual Appearing of Venus as extraordinarily bright?)

16“I, Jesus, have sent My angel to give you this testimony for the churches. I am the Root and the Offspring of David, the bright Morning Star.” (Contained in the same phrase when He says He is coming quickly for context sake)"  end quote.

Looking deeper into the 3 years biblical phenomena especially connecting the it is finished and from promise to fulfillment.

Mark 15:25KJV And it was the third hour, and they crucified him.
3 hours later
Mark 15:33KJV And when the sixth hour was come, there was darkness over the whole land until the ninth hour. (3 hours later) (Jesus died)

Mark 15:34KJV And at the ninth hour Jesus cried with a loud voice, saying, Eloi, Eloi, lama sabachthani? which is, being interpreted, My God, my God, why hast thou forsaken me?

1 Corinthians 15:4KJV And that he was buried, and that he rose again the third day according to the scriptures:

Hosea 6:2 KJV After two days will he revive us: in the third day he will raise us up, and we shall live in his sight.

21 Then there was a famine in the days of David three years,


18 Then after three years I went up to Jerusalem to see Peter, and abode with him fifteen days.


7 Then said he unto the dresser of his vineyard, Behold, these three years I come seeking fruit on this fig tree, and find none: cut it down; why cumbereth it the ground?


31 Therefore watch, and remember, that by the space of three years

The Stubble is left after the Harvest
https://www.thethirdheaventraveler.com/2020/04/after-harvest-left-is-stubble-signs-of.html

Why 2020 is especially exciting?