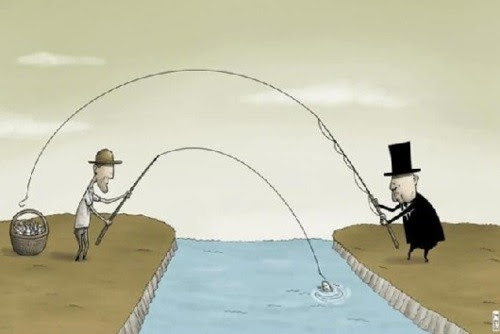 To the average person the Facebook IPO really doesn't matter.  But it should and here's why.

The "privileged few" who operate the world's system wants the public to not care and remain oblivious. It makes it much easier for them to plunder.  We should be keenly aware of this. But even deeper, more important than being aware of how we're constantly exploited by our own greed, I believe Facebook represents a sign of the times.

I believe Facebook really matters because of the timing of it, the size of it, and how quickly the dirty deeds were exposed. And the amazing irony of which a "social Network" which thrives on you and me sharing our lives, is now sharing their life with us.

In a deeper sense I believe this is all prophetic in the march to the end times.  Certainly, man's systems are being shown for what they truly are.   Idolatry in its purest form.

If we don't seek first the Kingdom of God and all of its Righteousness, we soon find ourselves worshiping the golden calf.    Do not be deceived. God is not mocked. Galatians 6:7

HERE'S SOME INFORMATION ON THE ISSUE:

Quote: "So, at some point soon, we will likely get the full story.
In the meantime, it's hard to conclude anything other than this:
In one of the biggest IPOs in history, in which a huge amount of stock was sold to small investors, privileged Wall Street insiders once again got top-notch information...and individuals got the shaft.
Facebook IPO, what really happened

Potentially far more insidious, analysts for three of Facebook's IPO underwriters, Morgan Stanley, JPMorgan Chase and Goldman Sachs, all cut their estimates for Facebook revenue just days before the IPO, Reuters reports. The news was not widely disseminated and may have contributed to the stock's collapse.http://www.huffingtonpost.com/2012/05/22/facebook-stock-price_n_1536410.html