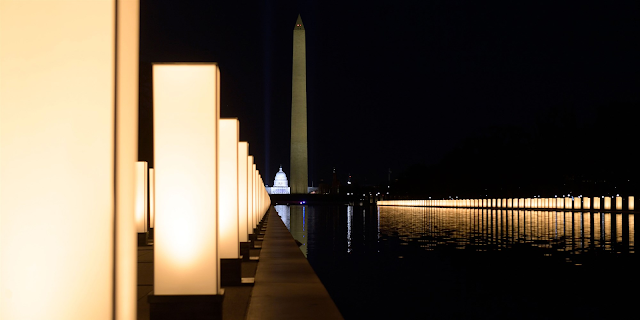 Could the COVID-19 memorial on the National Mall become permanent?

The National Mall  Read and Heed:
Satan aka originally known as Lucifer was cast out of the 3rd Heaven before creation and exists to this day as the PRINCE OF THIS WORLD. Not the earth but the world and the worlds system as allowed by God until the final Judgement at the end of the age when Satan is cast into the lake of fire. Revelation 20.  For now, all Political - Economical and Religious systems are influenced by Satan and his hierarchy. Scripture is clear from Genesis 1:1-3 gap and Ezekiel 28:12-18, Isaiah 14:12, Job 38, Luke 4:1-15, John 14:30,  Ephesians 6:12, 2 Peter 3:5-7. King James Version Bible. See why Bible translations are important. Link https://thirdheaventraveler.blogspot.com/2018/10/modern-bible-translations-are-satanic.html
Satan has set up his kingdom and strict hierarchy perfect example in Daniel 10:13,  the Prince of Persia.
The current 3 major Principle areas we can observe are The Roman Empire and coalitions in Daniel's vision Daniel 2:43 iron *former Roman empire * mixed with Mary clay New World Order Of the Alliance of the West Which today stands as A. The Vatican A sovereign nation within a nation with the Obelisk and the Dome. B. London England standing as the sovereign Bank, Financial institution within a country of the Vatican with the Obelisk and the C. The United States of America Washington DC a sovereign state within a state with the Obelisk and the Dome standing as the military power of the New World Order under the Vatican which is the seat of Satan.
See these links:
1, 2, 3... Washington, London, Rome The Hegelian Dialectic
https://youtu.be/7wSEiHgu1hw