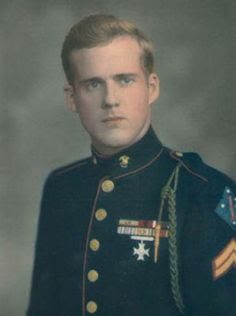 I'd like to take a moment to pay respect to a man of God who served his country in World War II as a Marine in the Pacific.  His name was Eugene Sledge.  A True Warrior rarely comes along as someone who looks like a "macho man" a Sylvester Stallone or Arnold Schwarzenegger. In the real world our true warrior is usually someone we'd least expect.  And such was the man Eugene Sledge, as they say, he weighed 140 pounds soaking wet. He was born frail and sickly in his youth. But he had the heart of a lion and saw some of the most horrific combat of the war and was one of the few who survived.  We know of some of these amazing feats by a journal he kept in his Bible.

I saw an interview with Eugene Sledge and he said, "I can't tell you how many times I repeated the 23rd Psalms and the Lord's prayer.

After the war when Eugene  enrolled in college, a registration clerk asked him if the Marine Corps had taught him any special skills.  Sledgehammer said, ""Lady, there was a killing war. The Marine Corps taught me how to kill Japs and try to survive. Now, if that don't fit into any academic course, I'm sorry. But some of us had to do the killing — and most of my buddies got killed or wounded.

Documentary Film on the Life of Sledgehammer: